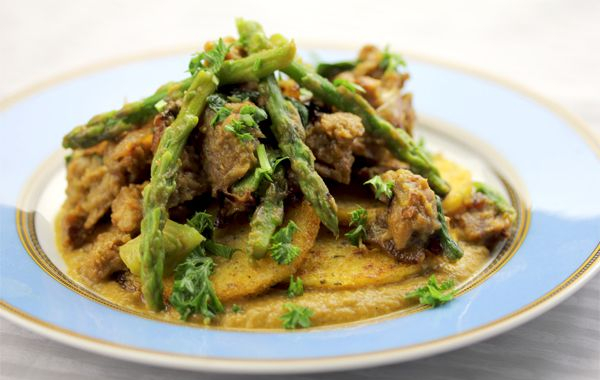 After preparing beef bourgouignon a few weeks ago for my baby daughter, I wanted to prepare another beef stew that is nutritious with a velvety consistency. I used pearl barley for the sauce and served crispy pan-fried polenta rounds for a nice contrast of texture.

I try to balance her meals and not serve her too many dishes made with white flour, so barley and polenta are a great alternative. My mother-in-law has just been diagnosed with celiac disease and has been asking me about gluten alternatives that would help her not miss gluten and would satisfy her appetite as much as regular bread or pasta. There are so many other options; you just have to think outside the box.

Wash the dried garbanzo beans and discard any floating or odd-shaped ones. Wash and rinse thoroughly in several water baths (about three times). Cover them in lukewarm water and let soak for about 12 hours.

In a separate bowl, repeat the same procedure with the pearl barley. Cover with double the amount of water as it will expand in volume.

Drain the garbanzo beans and barley, removing as much of the soaking water as possible.

Preheat a slow cooker (set on low mode, cook time “2 hours”). Place the mixture into the cooker, cover with water. Note: You could also make the stew in a heavy-bottomed pan and cook until tender.

When the mixture has cooked, drain the water. Let cool to room temperature. Blend the barley and garbanzo beans in a food processor. Add a little water for a smoother flow.

Chop 3 onions and, using a mandoline, thinly slice the remaining 2 onions. Heat about 1 tablespoon of olive oil in a non-stick pan. Add the sliced onions, 1 thin layer at a time (work in batches; you don’t want to over-crowd the pan or they won’t be crispy). Cook over medium heat for about 8 minutes, stirring after 4-5 minutes to prevent the onion from burning, until the color is evenly golden brown. Transfer to a plate lined with paper towels, leaving as much oil as possible in the pan. Add more oil between batches if necessary.

In a large pot, heat ½ cup oil. Add the 3 chopped onions and cooked for about 10 minutes until golden. Transfer to a blender. Add a little water if necessary for a smoother flow.

In the same pot, pan-sear each side of the beef cubes for about 1-½ minutes (a total of about 9 minutes) until nicely browned. Lower the heat and add the whisked yogurt. Cook over medium heat until all the moisture from the yogurt has evaporated. A layer of oil should come back to the surface. Quickly transfer the beef to a platter. At this point the beef isn’t cooked completely.

Combine the barley mixture and beef pieces in the slow cooker. Add 2 cups boiling water and the puréed fried onion paste to the cooker. Cover the slow cooker with a lid and let simmer for 2 hours.

Serve in individual deep plates. Cover the plate with the velvety sauce. Top with rounds of polenta. Add the beef stew. Add the aspragus spears and sprinkle with parsley. 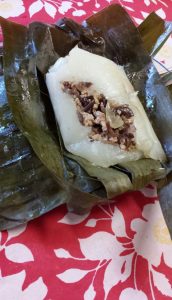 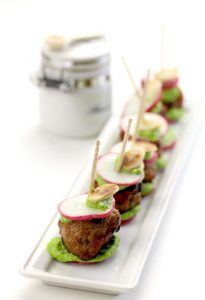